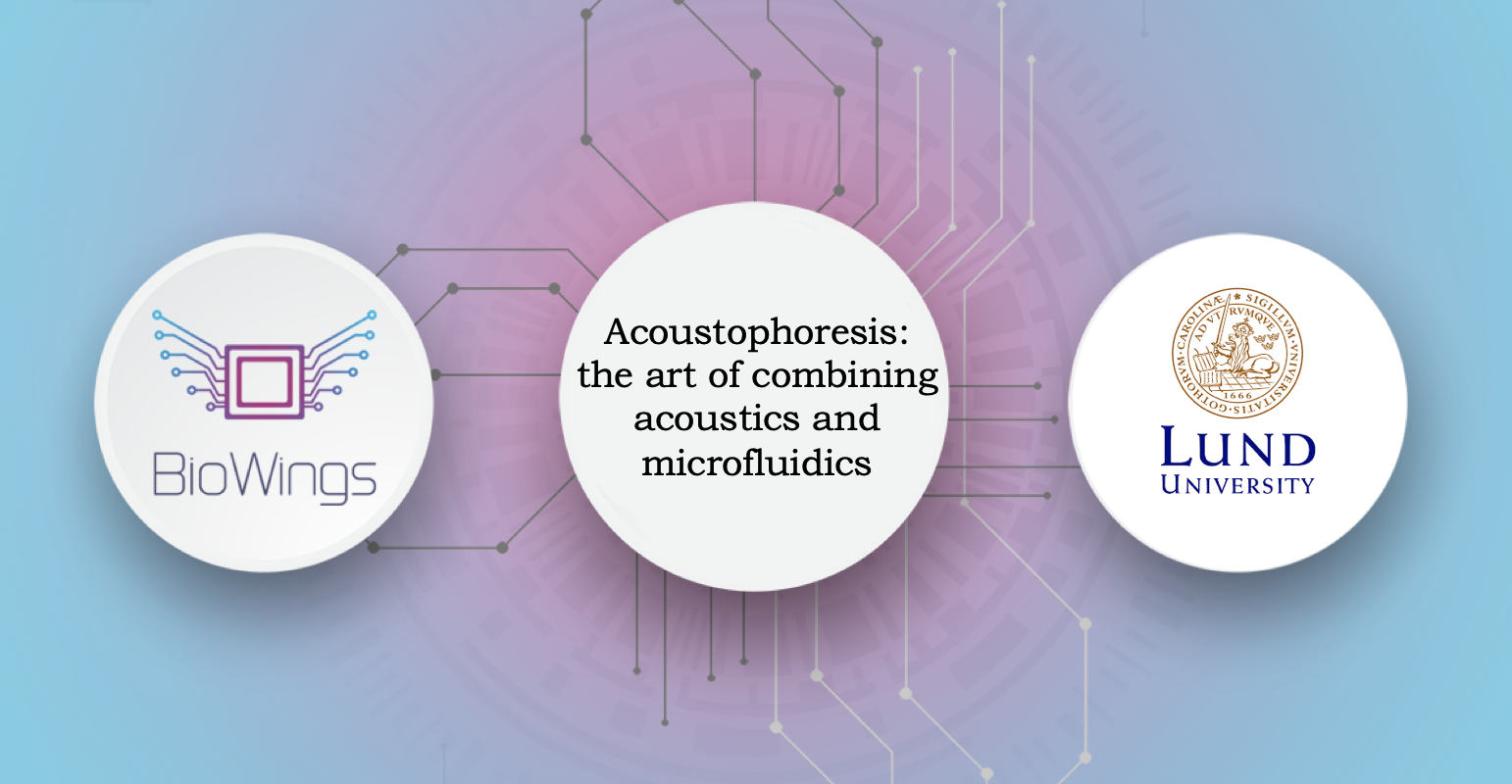 Acoustophoresis: the art of combining acoustics and microfluidics

The manipulation of particles is an essential feature of Lab-on-a-chip (LOC) devices. LOC-systems provide a platform where biochemical assays can be miniaturized, integrated and automated in a simple, portable, fast and cost-efficient way [1].

Acoustophoretic devices are a type of LOC systems in which particles can be moved and spatially localized by sound. An acoustophoretic system is typically made of a chip with embedded micro channels and a piezoelectric transducer attached underneath, responsible for the ultrasound actuation [2].

If the frequency of the ultrasound actuation is properly tuned, a standing wave or resonance condition is established in the microfluidic channels.

Typically, the system is built such that a single pressure node is generated in the center of the flow channel. Suspended particles flowing in a standing wave field are affected by acoustic radiation forces, that move them into specific locations in the microchannel depending on physical properties (size, density and compressibility) of the particles compared to the surrounding medium [3-6] (Fig.1). 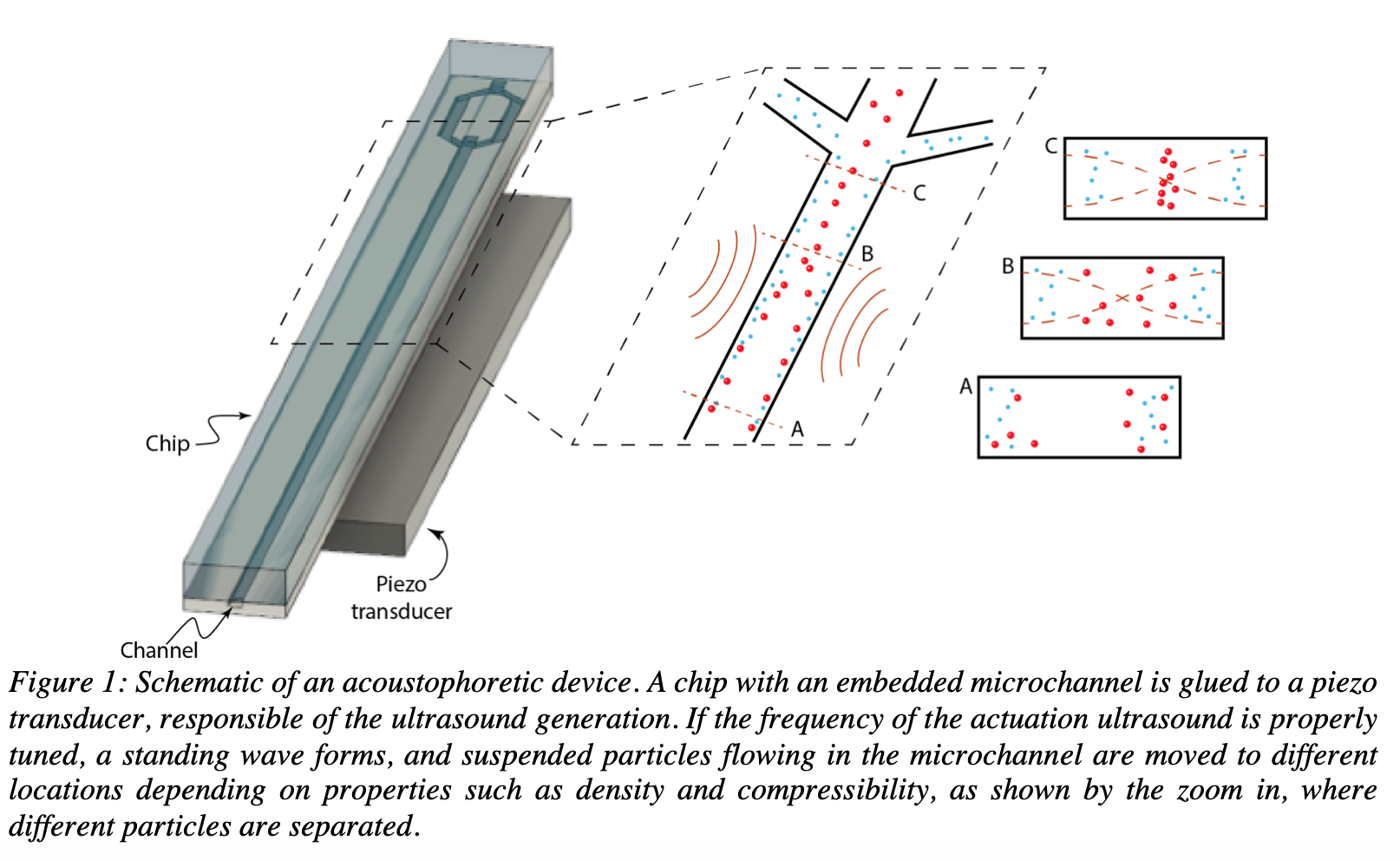 Commonly, solid particles such as cells or microbeads are moved into the pressure node, while softer particles, such as lipids and gas bubbles move towards the antinode.

Because of the laminar flow conditions in the microchannel, a particle holds its lateral position in the continuous flow even after passing through the sound field. A flow splitter enables a division of flow streams, thus allowing for particle fractionation based on their intrinsic acoustic properties.

As these microfluidic devices work with very small sample volumes, they are ideal for biomedical sample preparations and separation and sorting of cell populations for clinical analysis. Within the BioWings project, new improved acoustophoresis chips will be developed that will target the unmet need for efficient microscale plasmapheresis and rapid bacteria separation for sepsis applications as well as rapid point-of-care hematocrit determination. 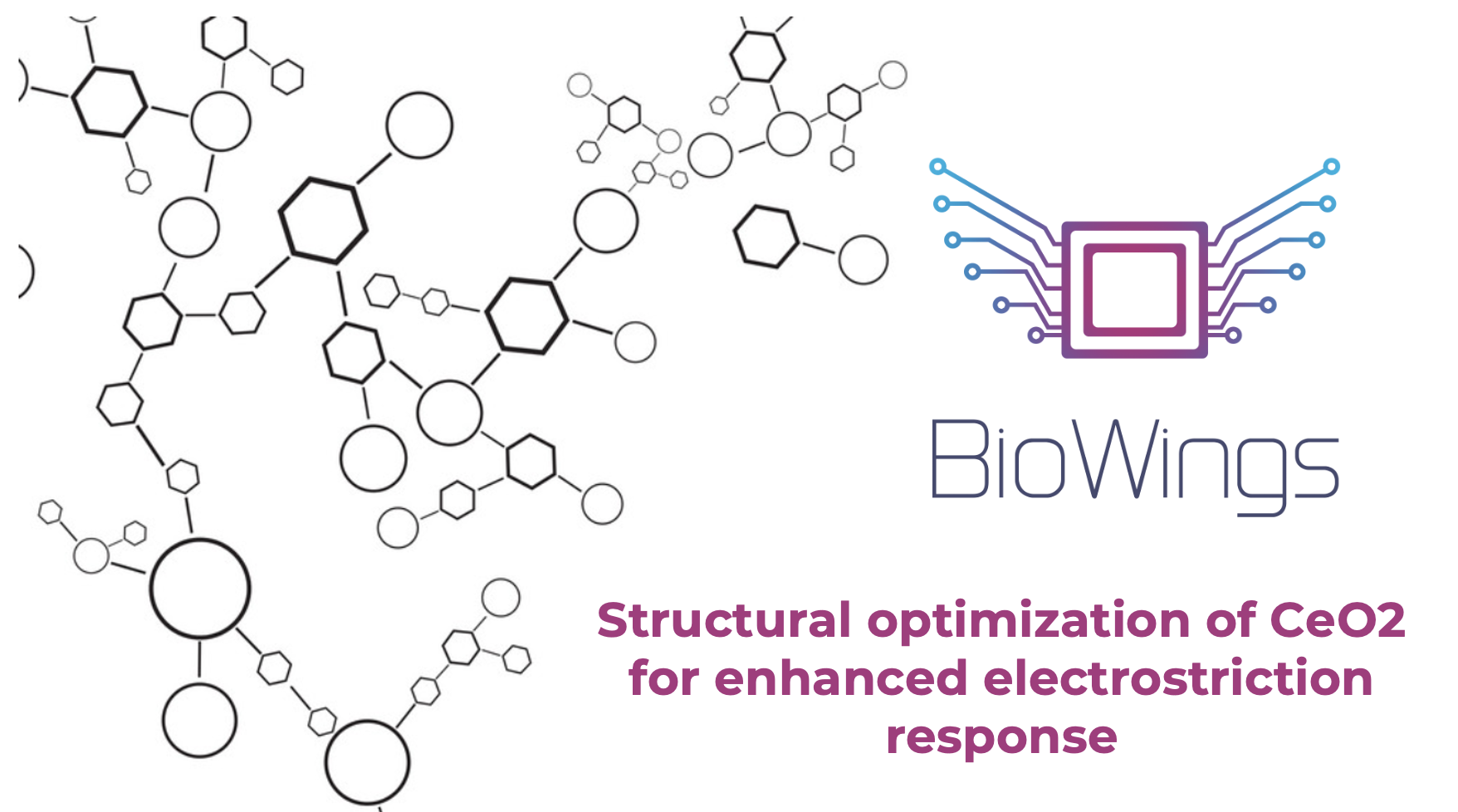 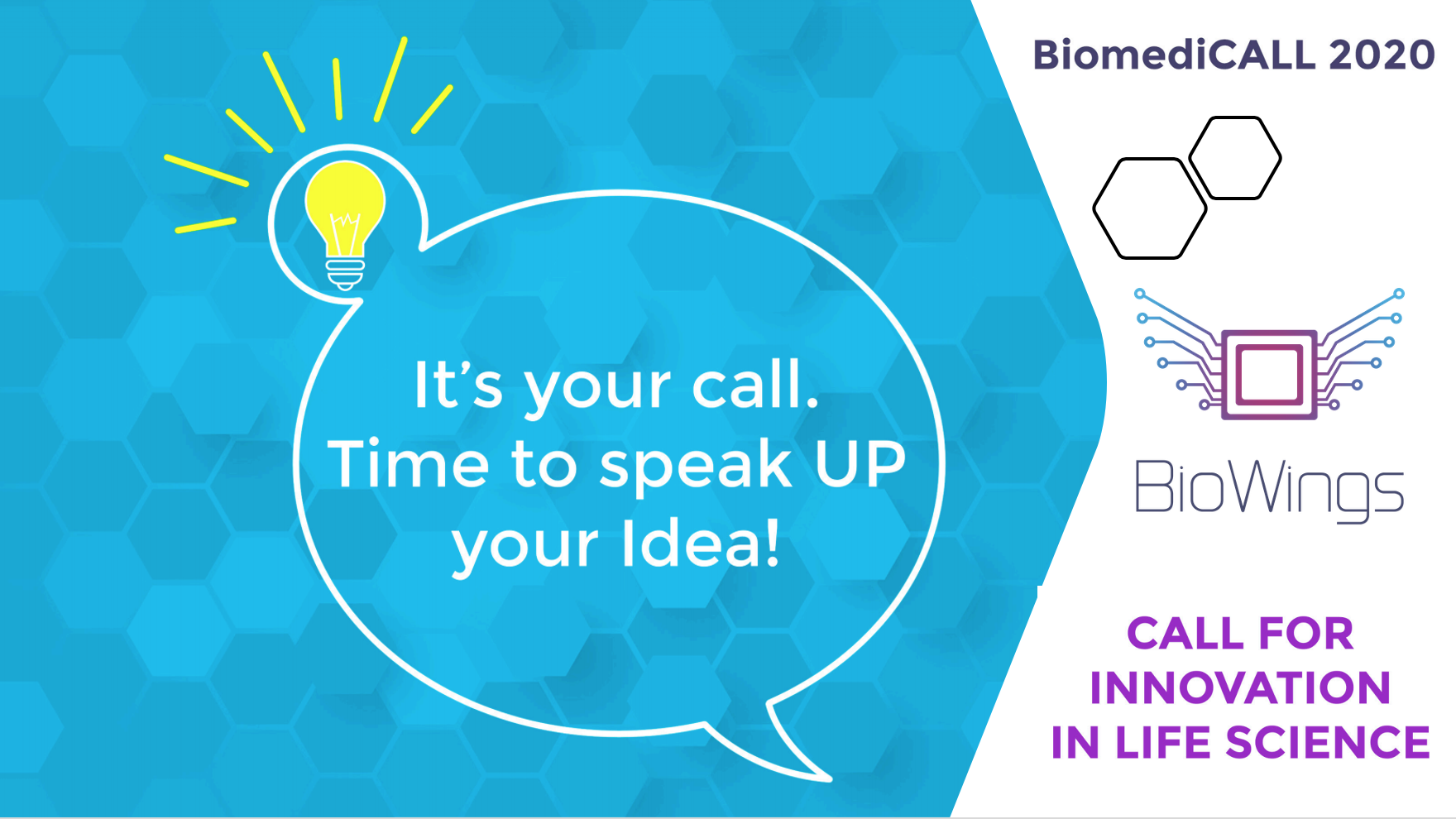 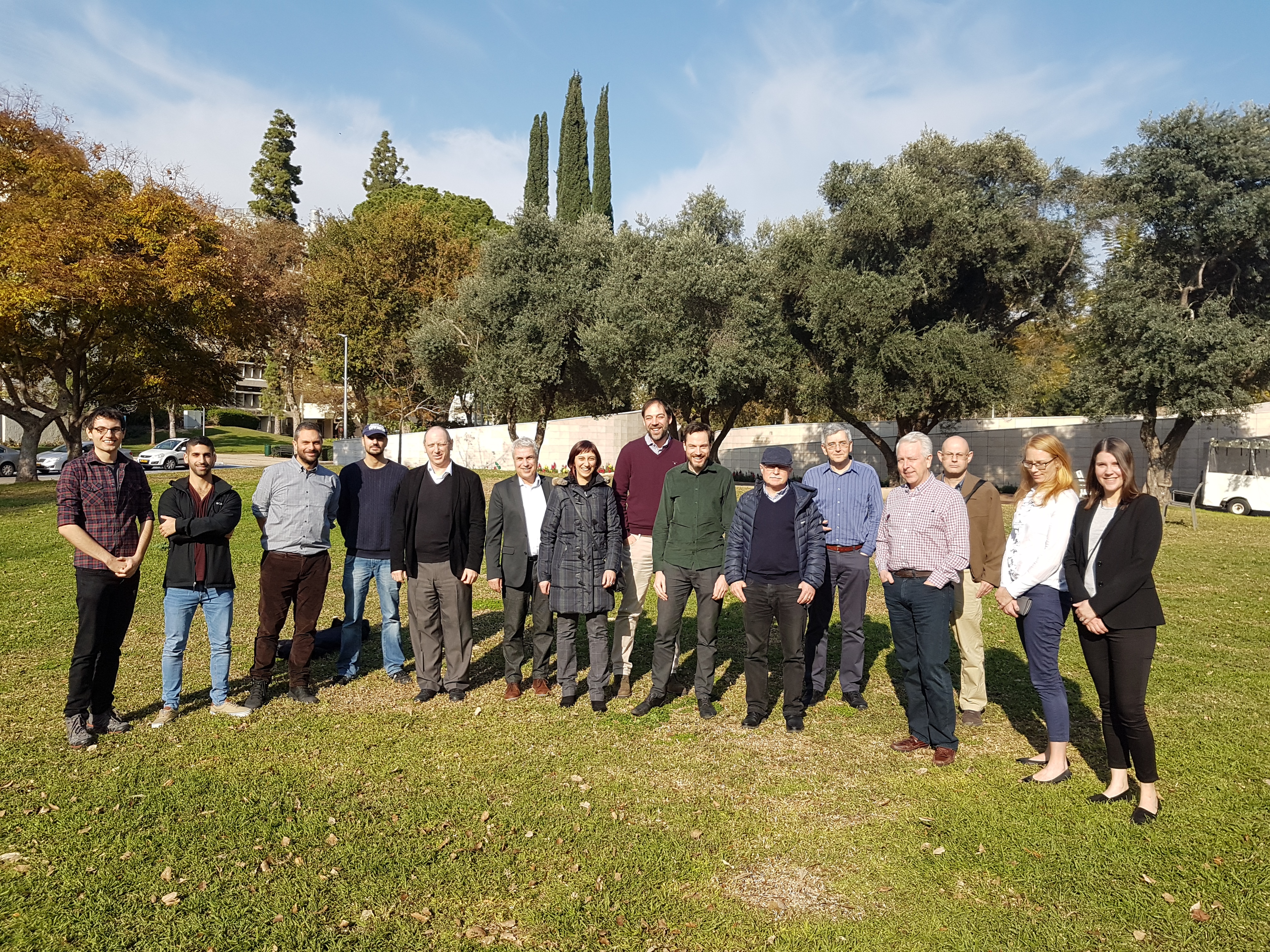